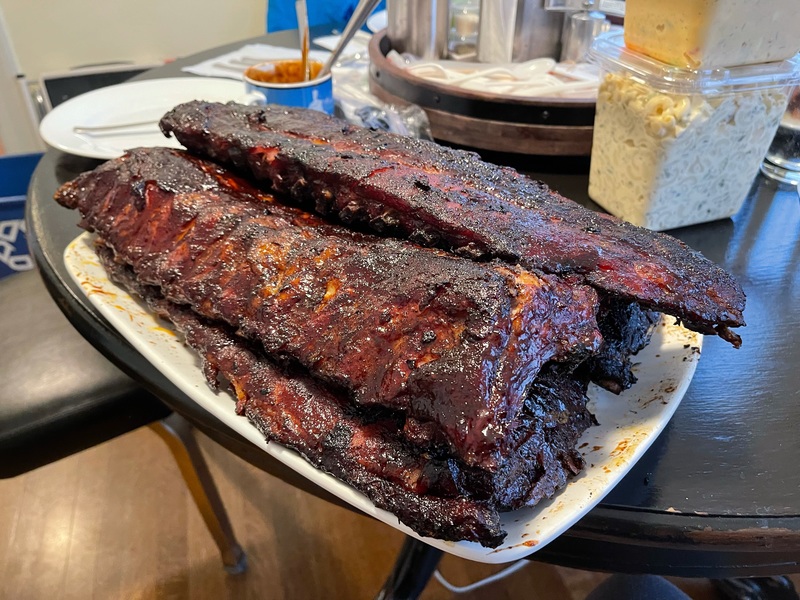 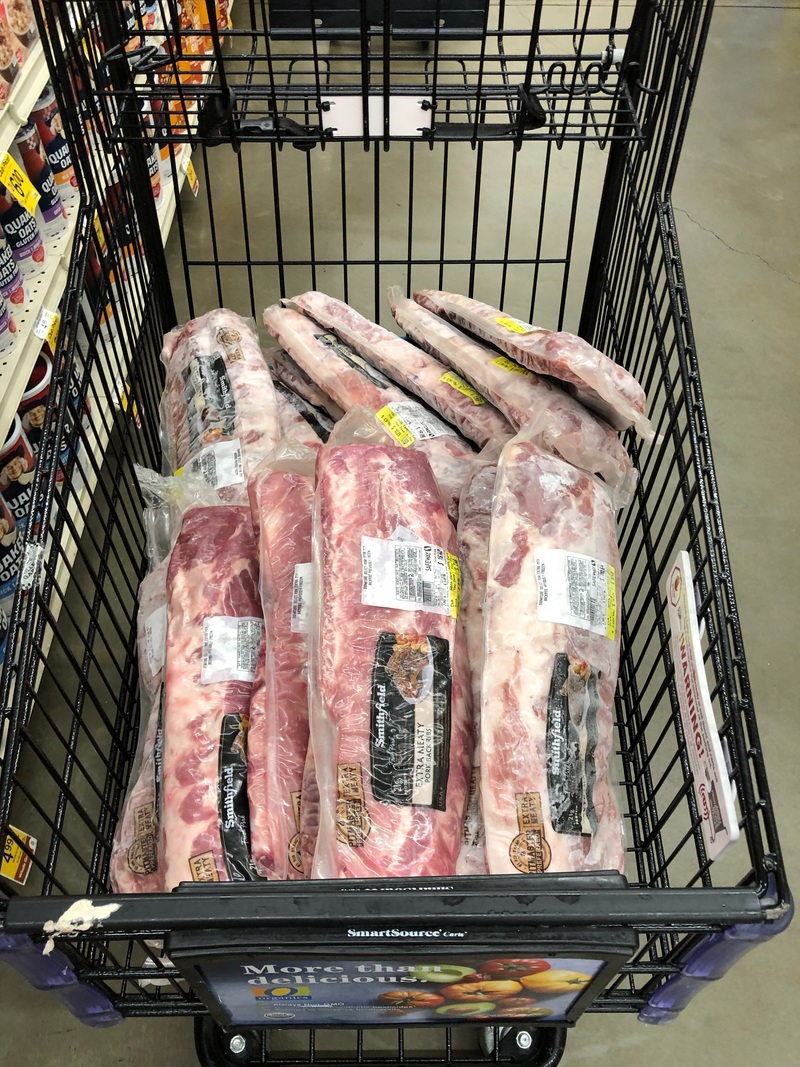 In the No Reservations episode in Sapporo, Anthony Bourdain visits a soba shop where he sees a master chef hand making soba. I've been a huge fan of handmade soba ever since our early visits to Kyoto. From that day on, I have never enjoyed eating soba at any place in the States that wasn't handmade (shout out to Sobaichi in Oakland as the only place in the Bay Area I've found). Knowing we'd be in Hokkaido, I wanted to make the trek to the same soba shop from that episode and experience what Bourdain calls the best soba he's ever had.

It was about a 20 minute drive in the falling snow from our hotel and in a somewhat secluded area. Our taxi cab driver actually missed the entrance and had to make a U-turn. Once we pulled into the nondescript parking lot, the only thing that even tells us we're in the right place is a small sign next to a wooden framed gateway. Stepping through that gateway, we were instantly transported to a serene snow scape. Incredibly picturesque and beautiful with the light snow falling around us. Seriously a postcard moment. 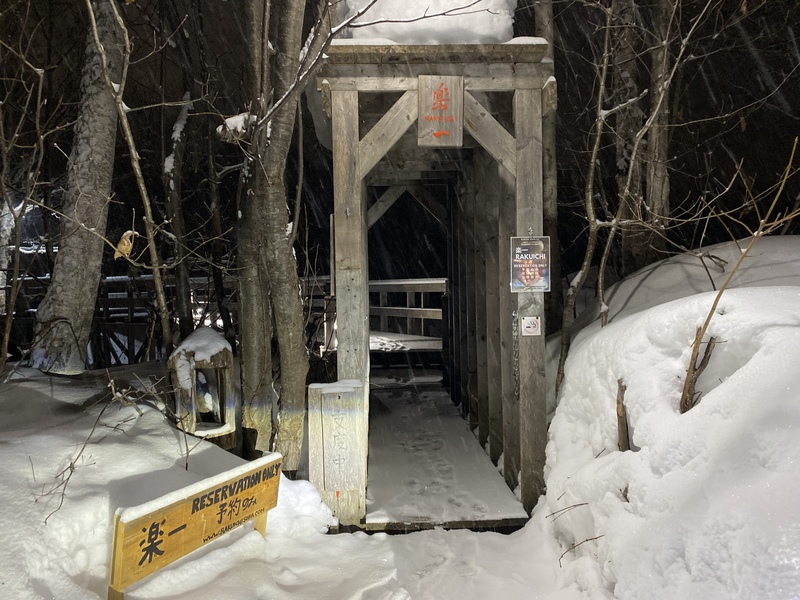 Upon entering, we were warmly greeted by Midori-san, the wife of the chef and Emily-san, an ex-pat working at the restaurant. The space is simple and humble, like walking into someone's home (which I'm sure it once was). We felt instantly at ease and excited for the meal to come. 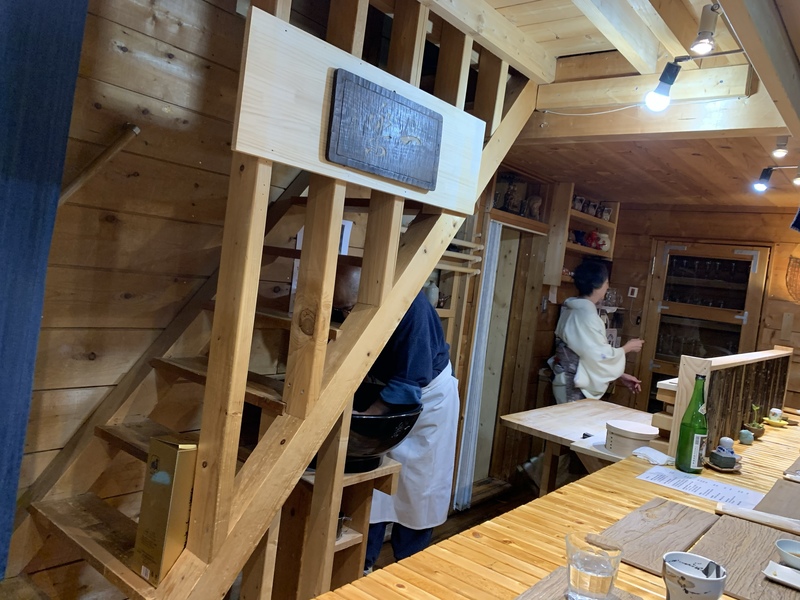 There's a simple drink menu and I was able to try both the imo sochu as well as the soba sochu which I tried both on the rocks and in the recommended style of mixed with the soba cooking water. My wife had some very nice Hokkaido sake, graciously poured and topped off by Midori-san. The tableware itself was beautifully crafted including the "place mats" which were Italian ceramic tile made to look like sheets of wood. The attention to detail was impressive. 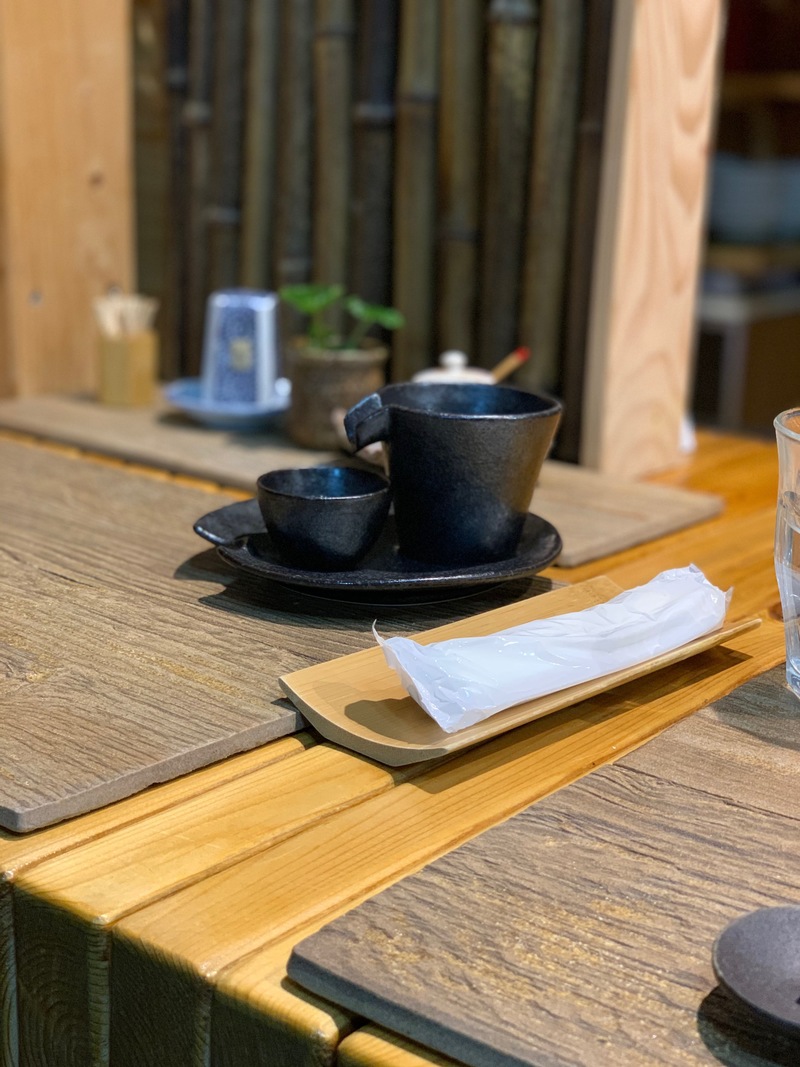 We were treated to their kaiseki course menu with some minor alterations for my food allergies. We started with a very lightly seared salmon topped with fresh wasabi and sitting on a daikon slice with a piece of kombu kelp at the bottom. The tastes was superbly balanced and the contrasting textures made for an enjoyable bite. 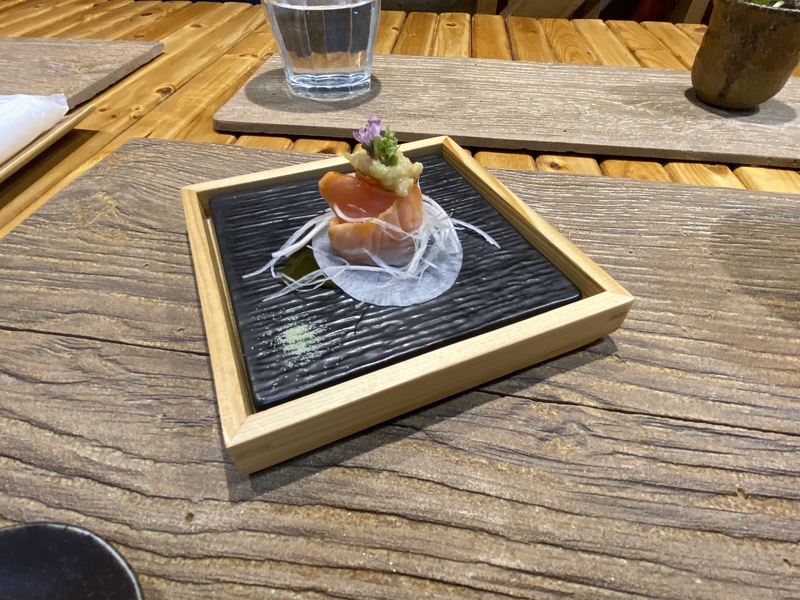 Next, was o-toro sashimi which needed no further additions save for wasabi, soy sauce, and a type of herb (sorry didn't remember the name) on the side that added crunch and a light clean flavor that cut through the fattiness. Quality of the fish was outstanding. 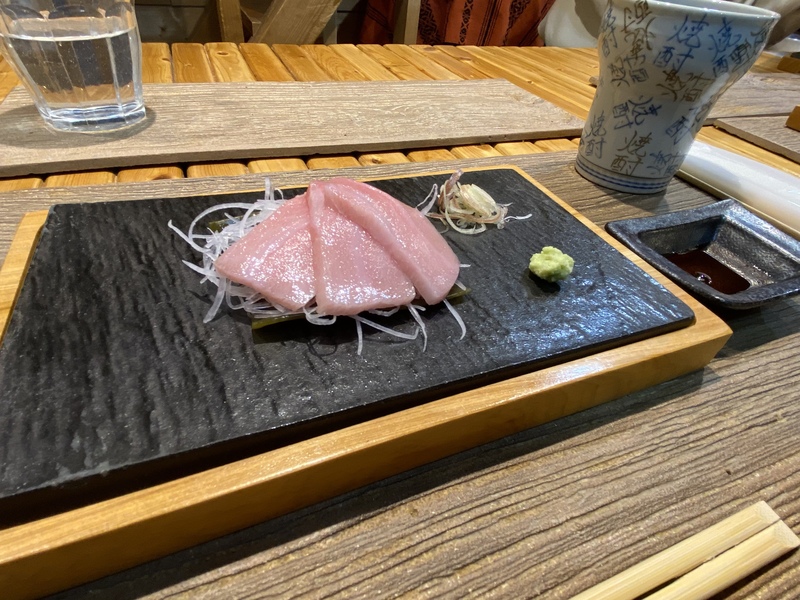 Our next dish was lightly smoked (or poached?) Hokkaido scallop topped with local uni, and fresh wasabi. The broth was a simple dashi that enhanced the sweetness of the scallop. I'm not an uni fan but this one was very good with a flavor that wasn't overpowering like the usual uni I've had. 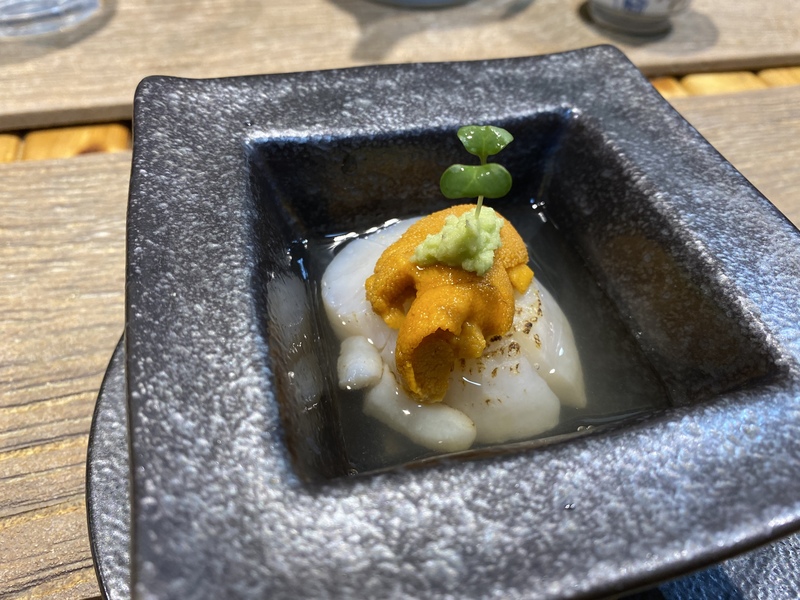 We follow with negitoro. As a huge fan of negi (Japanese green onion), I was blown away by how the crisp, sharp taste of the negi mixed with the raw tuna. Each ingredient was equally present yet the combination was even better. The yuzu peel and wasabi enhanced the flavor, creating a light accent to the strong flavors. 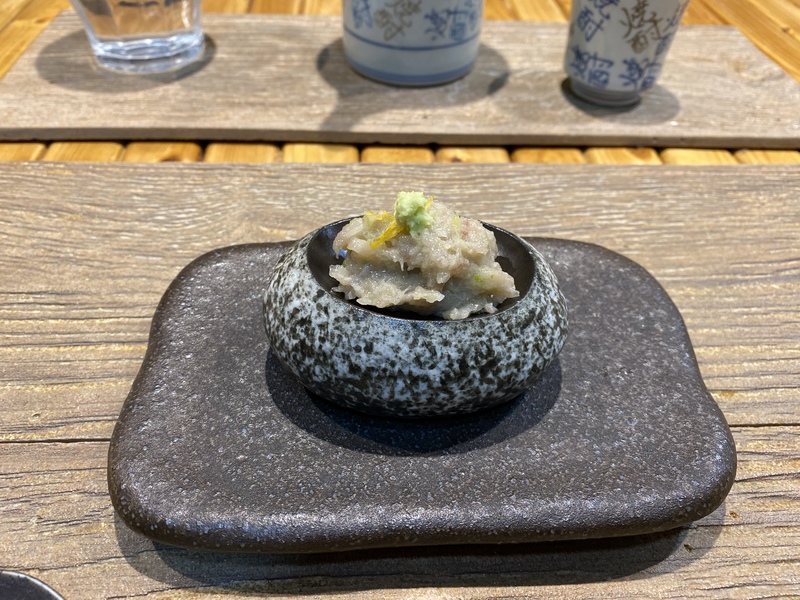 We move on to the bonito and bonito dish. Lightly seared bonito is topped with shaved dry bonito flakes and more negi. There is a hint of ginger as well which adds another flavor profile to the two similar yet different versions of bonito. 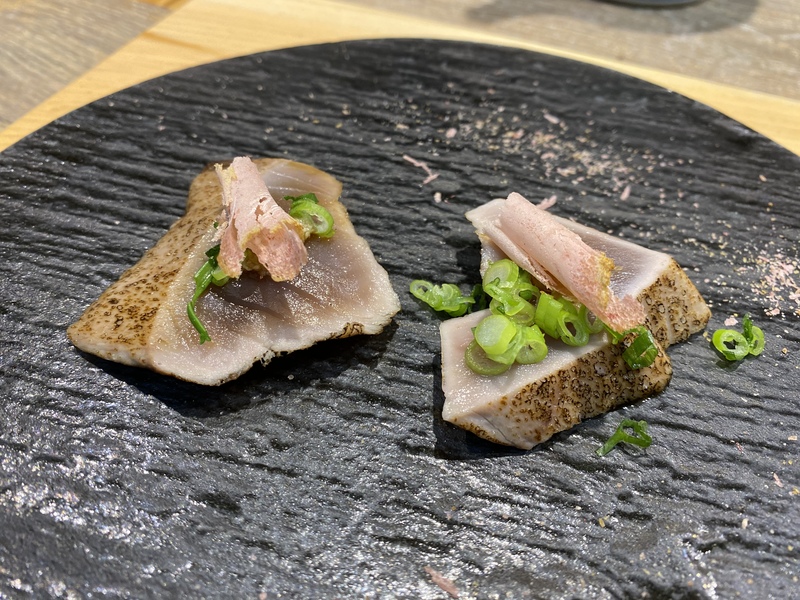 We then come to the hot portion of the meal which was shabu-shabu style Iberico ham. The dashi broth enhances the flavor of the ham when cooked and the light ponzu dip helps to cut through the meat. I tried cooking each slice at different degrees of doneness. The first I left in pretty long but the last couple were more rare. The ham is cut so thin that to get a nice medium rare, you only need to dunk it in for a few seconds. Each level of doneness brought out different flavors in the ham but it definitely was more flavorful on the rarer side. After all the slices were cooked, Midori-san said to add as much of the remaining ponzu as we wanted to the broth to make a flavorful soup. The rich broth warmed us up and was an excellent palate cleanser for the main course - tempura and soba. 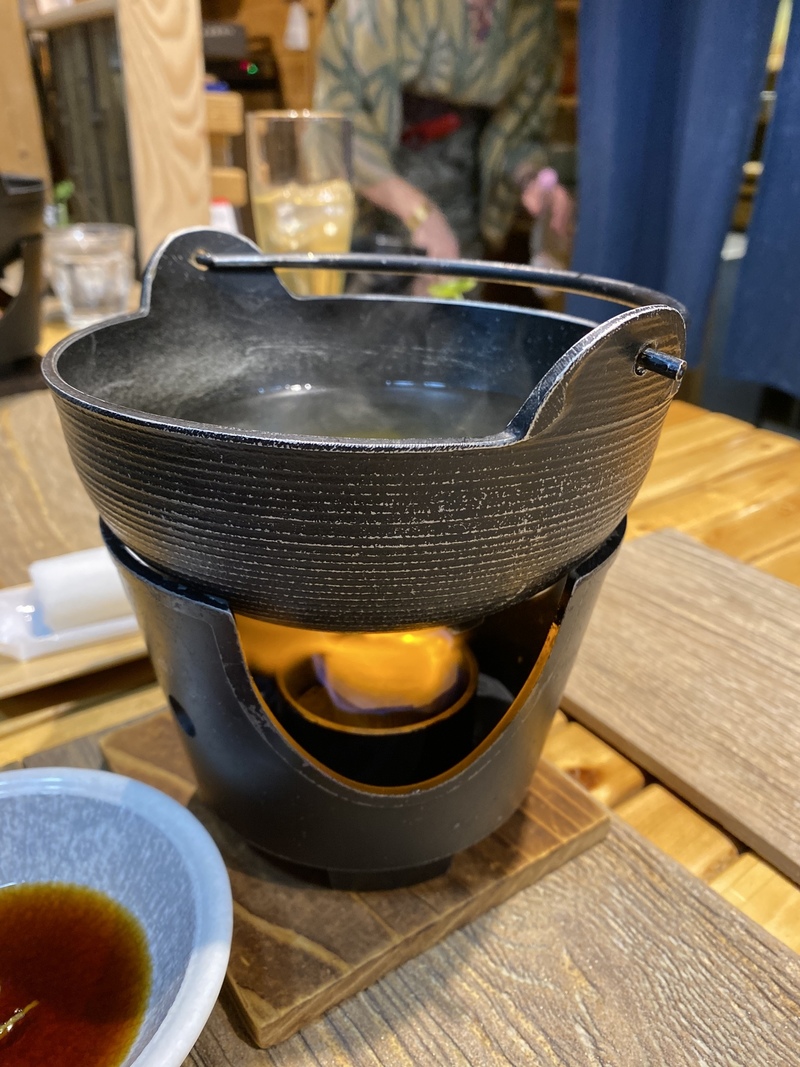 I, of course, could not have the ebi (shrimp) tempura so was given a couple of extra tempura veggies. My wife and daughter said the shrimp was perfectly cooked and was crispy on the outside yet warm/soft on the inside. I'll take their word for it. 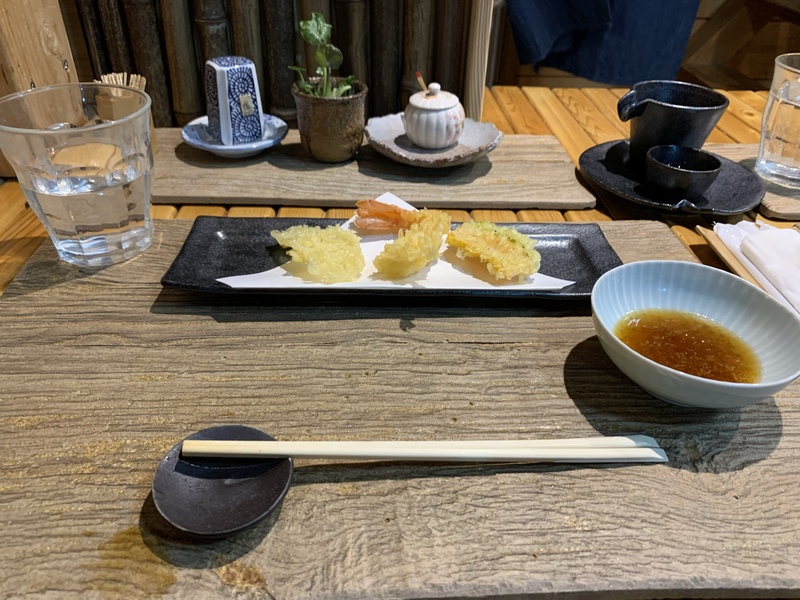 We now come to the real star of the evening, the soba. Soba master Tatsura Rai is world renowned for his technique and skill in making soba. You can see a demonstration of his soba making skills from a symposium in Copenhagen narrated by another famous chef, René Redzepi. I can tell you that seeing it in person made it seem so simple yet unbelievably mesmerizing. The entire process takes a good amount of time so I've edited it down for your viewing pleasure below.

I was honored to see this in person and even happier to taste the results of his craft. I opted to have the seiro soba (100% buckwheat) served with a warm duck dipping sauce over the traditional cold dip. In hindsight, I should have been more bold and asked for an extra serving (which they would have gladly offered) so I could have tried both versions. Ragrets. The soba itself was easily the best soba I've ever had. I realize I've never actually ever known the real flavor of buckwheat since the soba tasted so different from every soba I've had in the past. Most soba is instant and even the few places that will hand make soba will mix in some regular wheat flour to make the dough easier to work with. Not Tatsura-san who chooses to do 100% buckwheat and has made it an art of how to work it properly to get the most flavor. The amount of noodles was not huge and I could picture myself eating 10 times the amount, happily asking for more. We ended the meal with a simple warabi mochi which happens to be one of my favorite Japanese desserts. Again, superbly made and different than most warabi mochis I've had in the past. 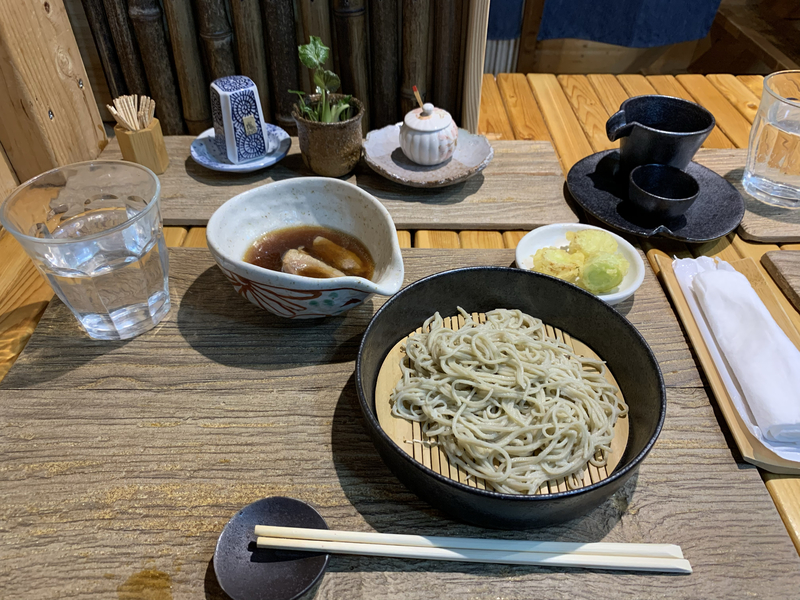 This was easily one of the best meals I've ever had in Japan (or anywhere else). Tony wasn't lying and it was bittersweet to see his autograph on the wall. Midori-san was beyond amazing and her care for us was truly felt. The way she made sure that my daughter was having a good time and enjoying the food warmed my heart. I could see myself returning to Hokkaido every year just to see them again. Perhaps during the summer when the menu will change and no doubt the experience will remain absolutely phenomenal. 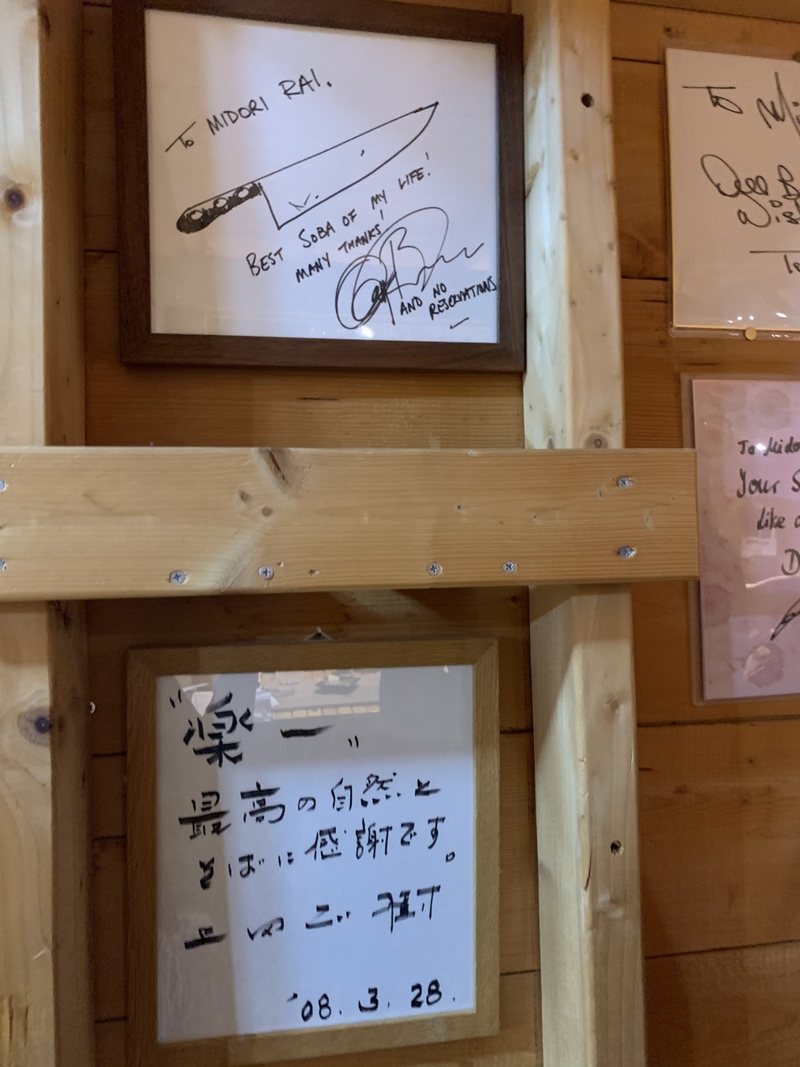 Niseko has a lot of foreign visitors (us included). What that means is that there is a fair amount of non-Japanese food throughout the town. There are a ton of western food spots like pizza, mexican food, etc. We even found a nearby "Off The Grid" style food truck area. Our breakfast at the hotel was pretty much San Francisco brunch fare with eggs benedict, avocado toast, etc. Nothing wrong with the flavor at all, just not what we came all the way to Japan to eat. 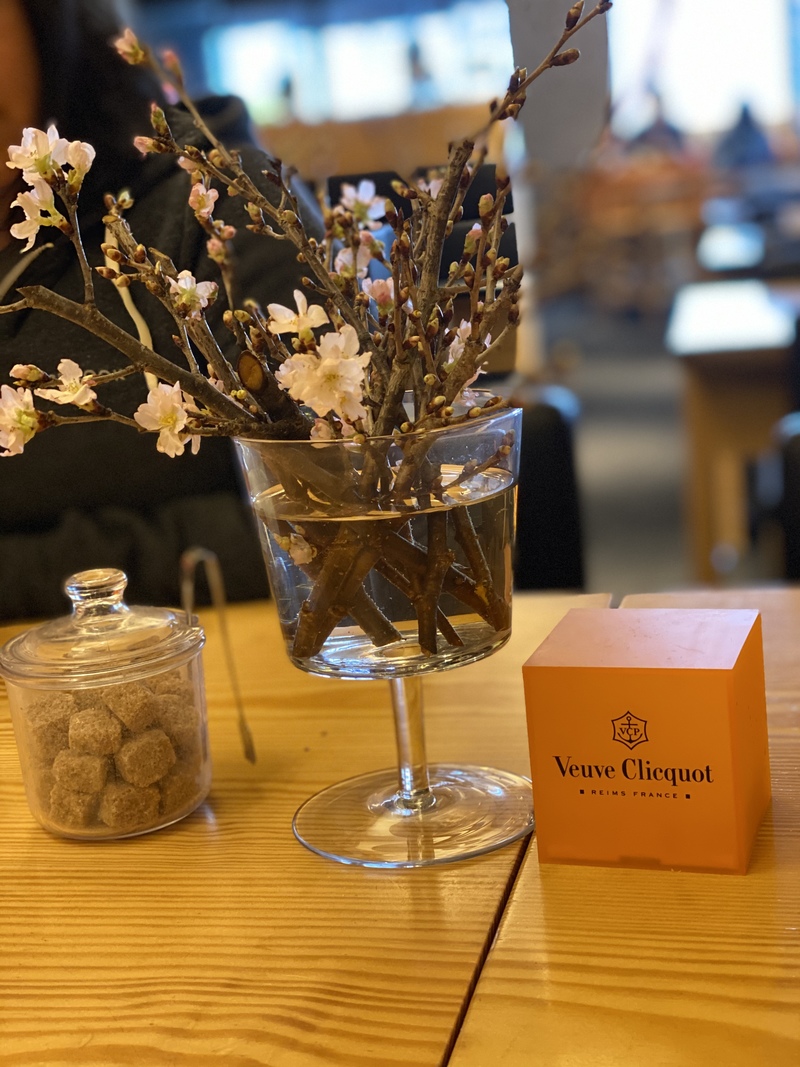 What that means is we've been spending a lot of time eating from the Seicomart, which is another conbini store similar to 7-11 or Lawson. Well prepared Japanese food both hot and cold that would rival any casual Japanese restaurant back in the States. And the prices can't be beat. About $5 for a huge fried chicken nanban over rice or a katsudon over rice. Made fresh daily too! We have probably dined from the conbini stores for more than half our meals here and without complaint. 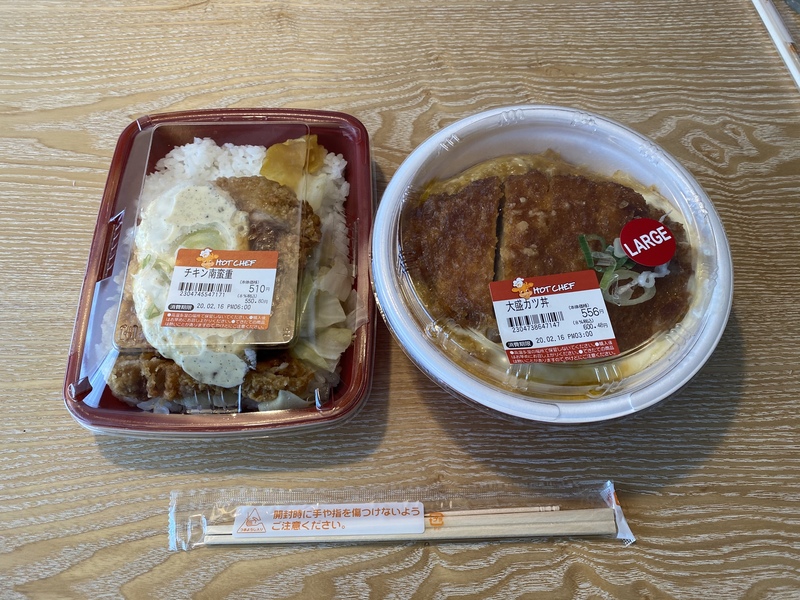 Heading up to Niseko for some snow activities. It was a fairly easy 2 hour train ride from Sapporo to the mountains with some beautiful scenery on the way up including a stretch along the sea and some snowy landscapes. 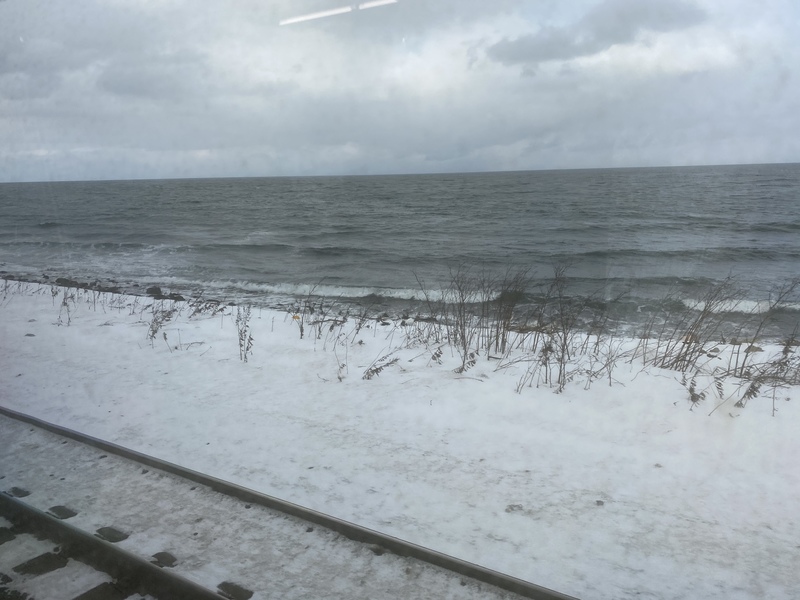 After settling in, we decided to grab a casual dinner at one of the many local izakayas, Koharuya. It was oddly located in the middle of a residential part of the city surrounded by what seemed to be AirBNBs with many foreigners milling about. The building itself looked like a converted ski house with a small downstairs bar area and a loft upstairs with a few tables. The place itself was packed and energetic with a constant stream of diners coming in. 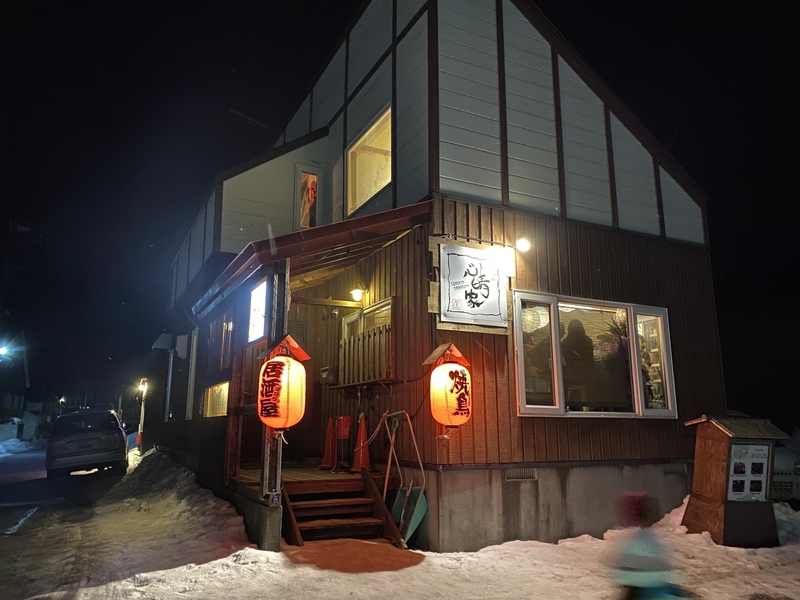 Great drink menu. I got a great imo sochu (Akakirishima) and an awamori (Tama no tsuyu). The wife got a couple of Hokkaido sakes. 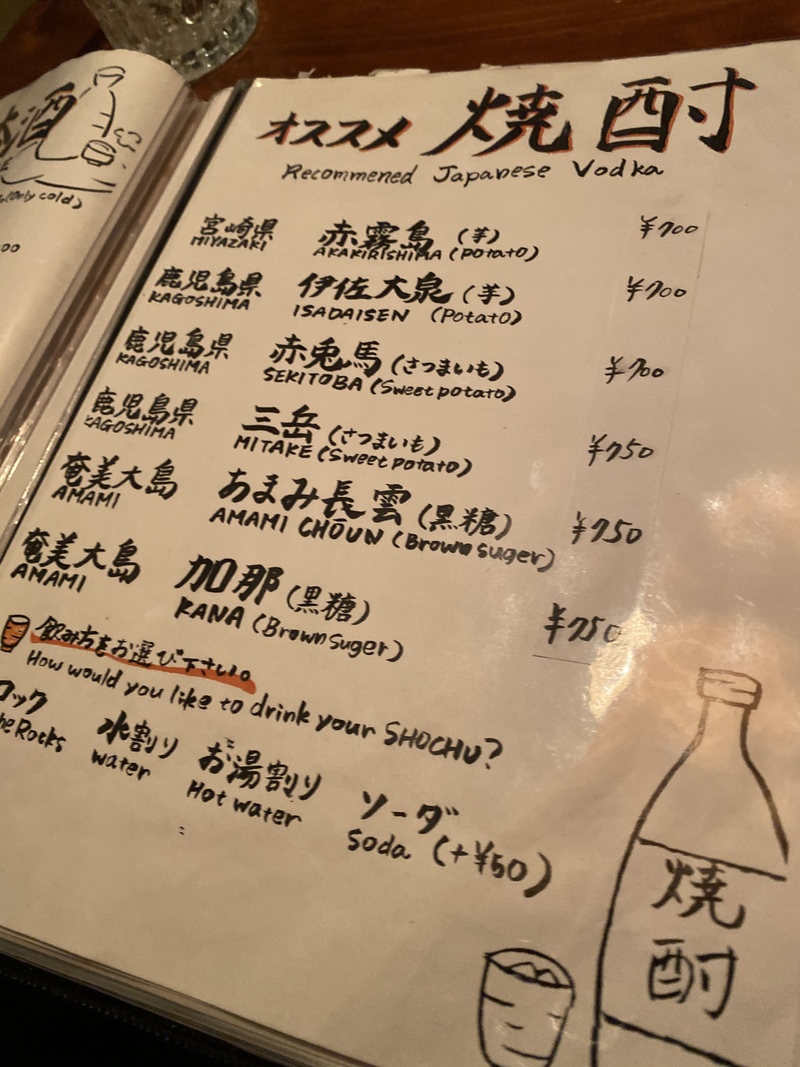 Plus a wide variety of food. We got a bunch of Hokkaido specials including venison, oysters, huge scallops cooked table side, and of course huge cuts of sashimi. There was even this weird Frankenstein sausage with a rib bone stuck in it and grilled. Not sure the rib added any flavor but it was definitely a nice visual. 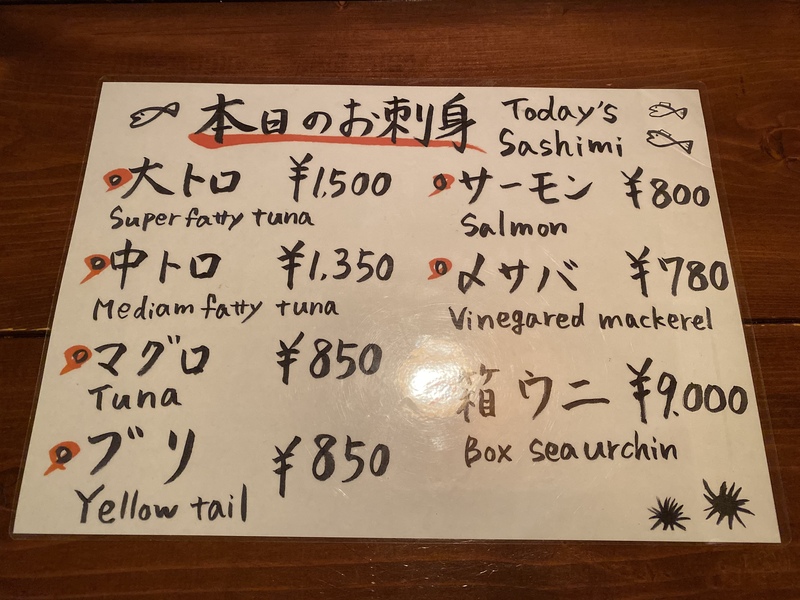