Saw this over at Crunchgear. Amazing product with real-world potential. Small, light, and actually inconspicuous enough. Not sure how much it costs but don't think it looks to be that expensive. Plus, if it's targeted to the people who have real physical disabilities, it might be covered by insurance.

I have always had a great disdain for the Segway. I think it's a pretty useless product that got way more hype than it deserved. The fact that it's been relegated to irrelevance proves my point. Big, bulky, expensive, and more of a status symbol than an actual product. It just screams - LOOK AT ME! PAY ATTENTION TO ME! Case in point, the Woz. I don't know what it is exactly but every time I see someone on a Segway, I want to just punch them in the face. 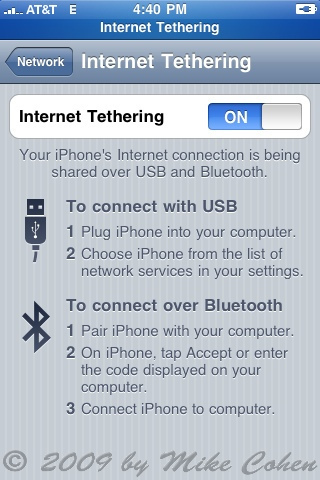 The good folks over at CrunchGear posted this hack on their site. Works only on Mac for the moment but I'm sure a PC version will come out soon. Tested it on my system and it took all of 45 seconds to set this thing up. Woohoo! Speed was more than decent.  About 1.3mps down and about 0.3mps up.

Palm Pre - Pretty cool, but so what?

CrunchGear has a demo video from CES of the Palm Pre. Overall, I think it looks pretty cool. Definitely a huge step up from where the PalmOS was before, but I can't help but feel like it's a very "Me, too" product. The Card View method of viewing applications is nice and there are some pretty nice innovations on the Contacts side of things. If you don't currently own a touch screen smart phone, I think the Pre is a very viable alternative to the iPhone, Blackberry Storm, or anything from HTC.

Rumor has it that they are going to price the phone at $399 SUBSIDIZED, which would put it at the high end of touch screen smart phones. A quote from Palm CEO Ed Colligan, as reported by Peter Kafka, when asked if Palm considered pricing the Pre at $200 or below to compete with the iPhone was "Why would we do that when we have a significantly better product?" Well Ed, you don't really have a significantly better product. You can make the argument that the Pre is as good, at best slightly better than the iPhone (though I wouldn't). In other words, I wouldn't switch to the Pre from my 1st generation iPhone because there's nothing that much better in the Pre. And let's not forget that anything that can be claimed to be better on the Pre can easily be copied in future iPhone software updates.

As someone who has had a litany of smart phones, it took a significant feature or service improvement from one device to another for me to make the switch. I started with the original Sidekick, moved to a color Sidekick (for the color, of course), then to a T-Mobile MDA (Edge performance increase plus more flexibility in adding apps on Windows Mobile), and finally to an iPhone (my first video iPod plus all the amazing UI features). I even bypassed an upgrade to the 3G iPhone because faster data speed wasn't enough for me to pay extra for essentially the same UI. Suffice it to say, simply being a little bit better (if at all) is not enough for someone to want to pay $100-$200 more for a Pre than a 3G iPhone.