Not sure why DeSean Jackson is repping Long Beach Poly when he played 3 great years of college football at Cal.  Ingrate.

UPDATE:  Just read on Wikipedia that his dad died of pancreatic cancer earlier this year, so I retract my ingrate comment.  Still, not sure why he couldn't have given props to Berkeley.

It seems appropriate that on the day I get my shiny new iPhone 3GS that the Wall Street Journal reports that Steve Jobs underwent a successful liver transplant about two months ago. The story goes on to say that Jobs has recuperated well and is set to return back to daily work activity at the scheduled end of June. Nothing more I want to say other than glad he's doing better.  It's always great news when a cancer survivor bounces back.

Valleywag is "reporting" that Steve Jobs is undergoing surgery today. There's speculation as to whether this is true or not. Michael Arrington wrote a post that Steve was actually in the office today (according to his source). My position on this doesn't center around whether the information is true or not. If it is true, then we should respect Steve's privacy and give him the time he and his family needs to recuperate. If not, people are just writing gossip for the sake of gossip and the report doesn't deserve another second of thought.

After reading the Valleywag article, I couldn't help but feel dirty. Has the technology industry reporting become like the tabloids? What next? Are we going to start hearing about high tech executives on x17online.com? Oh wait, too late. Every Jobs rumor overheard at a party or bar or toilet seems to be getting airtime. And to make matters worse, we're not reporting on the usual brainless tabloid topics - this is a person's health not what shoes they're wearing or who they're sleeping with. This goes beyond journalism's fiduciary responsibilities to shareholders and borders on harassment. I know nobody reads my blog but just so I don't sound like a hypocrite, this will be the last item I write about Steve's health except to welcome him back in six months. 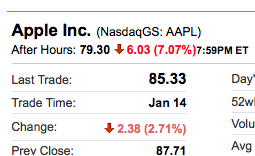 News broke this morning that Apple CEO Steve Jobs has disclosed he has a hormone imbalance that lead to his steady decline in weight this past year. Rumors about him on his deathbed, I suppose, are greatly exaggerated. I've been on the fence regarding whether he was right or wrong to not share this information earlier. A person's health is nobody's business but their own. But as the CEO of a very public company, doesn't he have the obligation to his shareholders to disclose any and all information that might affect the health of the company they own? Put it that way, the answer seems clear. However, put it another way like so - as the owner of a business, do you have the right to ask about the private health matters of your employees? Your answer may be different.

In the end, I think that Apple has always been a secretive company and Steve Jobs has always been very tight lipped about his personal life. However, I think that this whole thing could have been diffused very quickly by either offering full disclosure early on - "Steve is undergoing tests to figure out why he's losing weight. We've ruled out a return of his cancer and the best medical team in the country is on the case. They have assured us that his life is not in any danger." Or by having a very clear succession plan - "The success of Apple can be attributed to many good people, not just Steve. In the event that Steve wishes to step down, it'll be in the good hands of Person X." One thing I'll give Microsoft is that the ascension of Ballmer to the throne was gradual and very clearly laid out. You can at least rule out any succession ambiguity as the cause of their recent woes.