Amid all the running back and forth of the holidays and an upcoming board meeting, I forgot to mention that Centrro moved offices. We're now in more "professional" settings though still with a small office feel. We didn't go very far, about a block and a half away (from 3rd Street to 4th Street). We're still in shared office space but the building we're in has cubes, a reception area, kitchen, and nice conference rooms. Our office mates are a real estate investor and a couple of lawyers. The owner of the building (and one of our office mates) did a great job renovating the space. Our area is just below a nice skylight so we get a ton of natural light. I was telling Ike that our old offices had these fluorescent bulbs that were slowly killing our brain cells. We literally could feel ourselves getting more and more forgetful and were having trouble coming up with words to describe things.

We toured numerous office spaces in Jack London Square and Old Oakland. I can tell the economy is going downhill as I've never seen so many nice Class B+/A office spaces available. We even had brokers telling us to craft unique deals with landlords like paying for only a portion of the space in the first year, then slowly increasing the amount of space we'd "occupy" until we were paying on the full space towards the last year of the lease. Others were just telling us to make an offer ... any offer.

We chose shared space once again because we're still trying to keep things lean but also because we're waiting for the new Jack London Market to go online in the first half of 2009. It's a mixed use project that incorporates the largest open air market on the West Coast (bigger than the Ferry Building or Pike Place - see last photo) plus about 100,000 square feet of office space. Not to say we're going to be able to afford an office there but I'm betting that their will be a migration up from existing tenants of Class B+/A space to the JLM building. This is going to flood the market with even more good office space in the area which will put us in a better position to negotiate a good deal sometime in 2009. 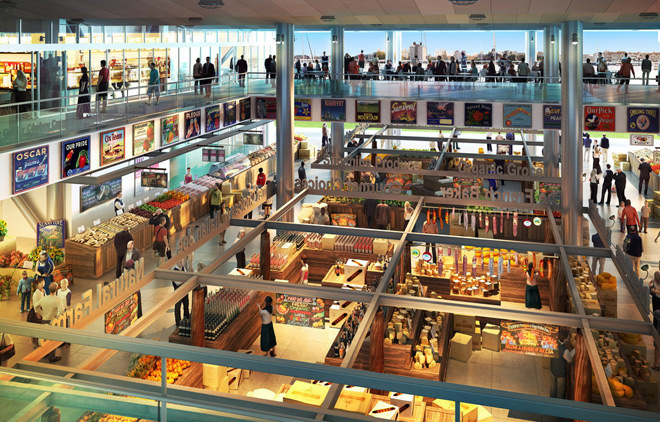