Not literally, of course. Anyone who knows me will agree I could lose a few lbs. I'm speaking from the start-up sense. I just read an article on Techcrunch that VC backed start-ups are having a hard time exiting. The post right after it was that Eyespot ran out of cash and shut down. I've never used the Eyespot service but it looks like it took some heavy engineering to get it done. To that end, they raised about $3.6 million and hired 22 people. I'm sure they also got an office, computers, water, etc. to support these 22 people. That's a lot of infrastructure cost and it looks like they didn't have the revenues to support it.

Taking the lessons learned from our last start-up, we definitely decided to go lean the second time around. Case in point, at our last start-up we got a 3 year lease on almost 5,000 sq. ft. of office space when we only had 6 employees (we were going to grow into it - so we thought). Turns out that the lease was one of our biggest cash sinks. Start-up number two? We share desks in a shared office space. Here's a shot of our messy work area. 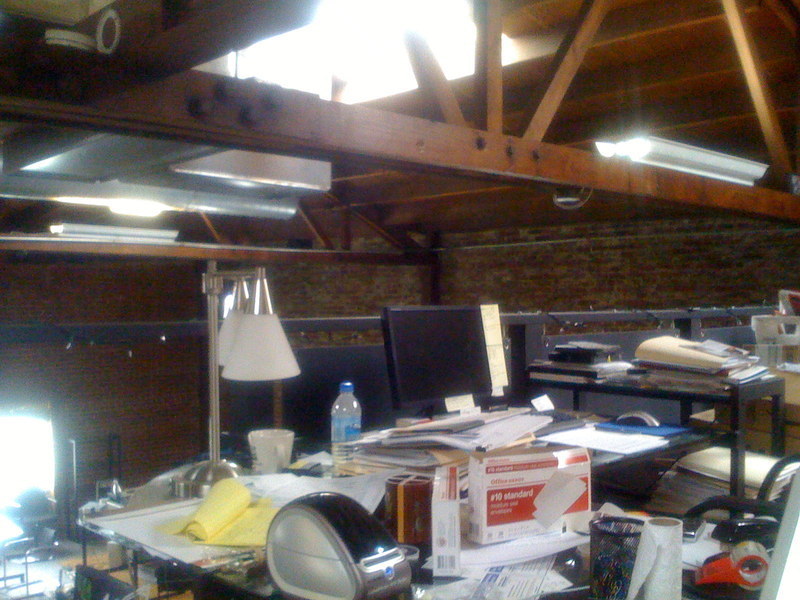 We did this when we didn't generate any revenue because since we boot-strapped this venture, we thought it better to spend our limited funds on talent versus rent. It turned out to be a good move as we weathered through some lean months before ultimately hitting our stride and becoming cash flow positive. Fast forward to over a year and we're still sitting at the same desk except now we rent out a few more desks as we've grown. Once we have built enough of a cash flow cushion, we MIGHT think about getting a separate office space. Part of me has become attached to the more intimate setup, though. We now easily bounce ideas of each other which will become harder once everyone has their own desk. I guess that's the price of progress though.