I owe Stephen Curry an apology...

A few months ago, I lamented the drafting of Stephen Curry by the Warriors. I thought he was just another undersized guard who dominated a weak conference in college and would create a log jam for an already guard heavy team. Fast forward 8 months later and I'm eating my words. Curry started slow but with the injuries to many key players (including Monta Ellis), he's stepped up his game as of late. Right now, it's a 1-2 race between him and Tyreke Evans for Rookie of the Year. Given tonight's performance against Sacramento, I'd say he's made up a ton of ground. I still think Evans will end up winning unless he really stinks it up the final few months of the season. But I wouldn't trade him for Brandon Jennings given his recent free fall and inconsistencies. Curry seems like he can only get better with experience and a good coach (not Nellie). Here's hoping Avery Johnson follows Nelson again like in Dallas...

Another one that gets away ...

So it's still relatively early in the NBA season and of course the Warriors are not looking promising. However, tonight's game versus Milwaukee was both encouraging and discouraging. First the good part, the W's played a pretty spirited game against a pretty good Bucks team. They actually had a chance to win it in the final seconds but of course, it got away from them. Now here's the bad, Brandon Jennings went off on them tonight for 55. Not only that, he did it in only 3 quarters (didn't score in the 1st). In this young season, Jennings looks like the steal of the draft at #10. He's averaging over 20pts, 4rbs, and 5asts and those stats will be going up after tonight's game. Before this year's draft, I hinted that Jennings at #7 would have been good for the W's as a play maker. I even hinted that they should have traded Curry to New York. It's not to say that Curry is bad (jury's still out) but it's clear that Jennings is going to be a good, even great player. I guess another in the line of Warrior draft gaffs...

Maybe I was a little too harsh on Curry given that we could have drafted this... 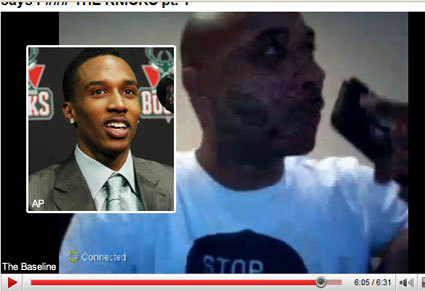 Though I still have my reservations about Stephen Curry, at least he hasn't pulled a bone-head act like Brandon Jennings. Man, you never really know nowadays who is taping what - The Sporting News reports that Brandon Jennings was caught on tape saying some inflammatory statements about his teammates, Ricky Rubio, etc. This is after Jennings said some unflattering things about Rubio and then had to back pedal. One can say he's just got a lot of youthful confidence and how we talk to "friends" is a lot different than how we would talk to a reporter. Still, he seems to have dug himself a pretty big hole with team management and some of his teammates. Again, he may turn out to be miles better than Curry but his mouth has written a pretty big check that his ass will need to cash in about 4 months.

Jamal Crawford to the Hawks

I posted about this potential trade earlier. It looks like it's going to happen unless Jamal Crawford doesn't love money. The Warriors get Acie Law and Speedy Claxton in return but this trade seems to be all about getting rid of Crawford. I don't expect either of them to see much playing time next year. Claxton is hurt and Acie Law has been largely a bust. The good thing is that both of their contracts come off the books next year which will clear about $7.5 million for the W's salary cap. Jamal never really fit into Nellie's system and given the logjam the W's had at the off guard position and given his large contract, he seemed the logical player to move.

Does this mean the W's will get a big man or a point guard? I can see either happening but only if Jordan Hill falls to #7. Otherwise, it's Brandon Jennings, Stephen Curry, or Jonny Flynn. If they get Hill, then a starting rotation would be Ellis, Magette, Jackson, Randolph, and Biedrins with CJ, Morrow, Azubuike, Hill, and Turiaf making up the second team. If they pick up a point guard, then the starting 5 remains the same but CJ now becomes expendable (he's a free agent) and the second team will be [insert new PG], Morrow, Azubuike, Wright, and Turiaf. Will see what actually happens tomorrow. Can't wait!

UPDATE: As I hit the send button on this post, just saw that there's a trade brewing to send Jamal Crawford to the Hawks for Acie Law and Speedy Claxton.  Gotta let that marinate for a sec before I give my thoughts but I was never a big fan of Crawford and his big contract.

Before I talk about the W's, just read a great article by Bill Simmons re: the Clippers and their curse. The Native American angle is interesting and humorous.

Lots of goings-ons have occurred in the past 24 hours that may shift a lot of what happens in tomorrow's draft.  That's not including the Richard Jefferson trade to San Antonio which suddenly makes them much better, in my opinion. First, they get a 20 point scorer to go alongside Duncan, Parker, and Manu. Plus, they may actually sign back Bowen and Thomas if they are bought out of their contracts (highly likely). Overall, a win for the Spurs. The other big trade news was Minnesota getting the 5th pick from Washington for Foye and Miller. That gives them to 5th, 6th, 18th, and the 28th pick in the first round. Wow - if only this wasn't a weak draft. Word around the campfire is that their looking to package the 5th and 18th or the 6th and 18th to get the 2nd or 3rd pick to grab Rubio. Given that Minnesota has a lot of holes to fill, they'll do fine whether they trade up or keep those picks for themselves.

Regarding what the Warriors do with the 7th pick, it's really a crap shoot at this point. Some boards are projecting that the W's get Brandon Jennings or Jonny Flynn or Stephen Curry or Jrue Holiday while some see Jordan Hill falling to them. Personally, I would go for a point guard over a big man given that the W's could slot Anthony Randolph or Brandan Wright at the 4. Both seem a little underweight to play the position but there are rumors that Randolph grew an extra inch and added 20 pounds since the end of the season. That's just crazy talk. Randolph definitely has more upside than Wright and should eventually be a starter, whether at 4 or 3. I think adding Jordan Hill would mean reduced playing time for Wright and after watching him play in the Pac-10, I'm not 100% convinced he won't be just an average NBA player. If there was any depth in this draft, it seems to be at the point guard position. Jonny Flynn has the maturity and polish at PG, Stephen Curry has the jump shot, but Brandon Jennings and Jrue Holiday have the upside. Holiday has fallen as of late and Jennings definitely has maturity issues but they both are considered long term projects. I'd rather opt for the upside versus the "NBA ready" players like Flynn and Curry because I don't see either of them ever being any better than what the W's have now in CJ Watson (who's actually an above average back up PG). Why not roll the dice and go for someone who might become a Rajon Rondo? Regardless of who they get, there's not much downside. The 7th pick is far enough down that even if the player turned out to be a bust, it's not like wasting a #3 on Mike Dunleavy, Jr.