An amazing feat of engineering that no one will use

I'm constantly amazed at why Segway gets so much publicity. They introduced their latest invention, the P.U.M.A., a collaboration with GM. It's basically a Segway with beefed up performance, two seats, and a windshield. I'm sure it's an amazing feat of engineering and that very intelligent people got together to build a very complex "thing". But the point here is who will use this? I remember when the Segway PT came out 8 years ago with much fanfare and hype. Fast forward to today, the only Segway PTs I see are at the Segway rental shop next to a pho restaurant in East Oakland (perfect location!). It seems that people got enamored with technology without making it functional. Just because we have the ability to build it, doesn't mean we should. Also, great to know that GM is involved. Obviously, they have nothing better to do, right? 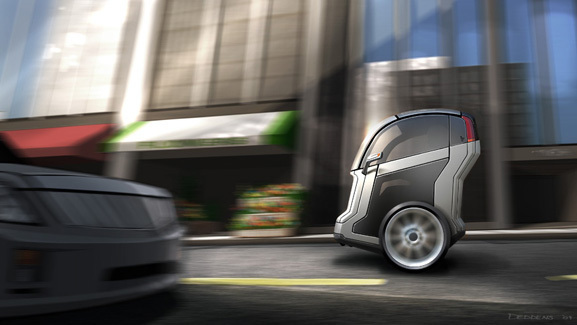 The Obama administration asked Rick Wagoner, the chairman and CEO of General Motors, to step down and he agreed, a White House official said.

You never want to relish when someone gets fired.  But don't cry for Rick Wagoner.  He made over $63 million during his career at GM, most of which came during his years as CEO (a little under $39 million).  When you realize that GM lost approximately $82 billion in the last four years of his tenure, it was obvious that new leadership was needed.  Interim chairman, Kent Kresa, also stated that most of the GM board of directors would be changed at the annual meeting in August.  Another good move seeing as how they kept on supporting Wagoner year after year while he presided over the meltdown of an American icon.  I don't know if the US auto industry can be saved, but it couldn't hurt to have some new blood running things.  I want to desparately support American made automobiles and if the stars are aligned, my next car will be American made.

Techcrunch has a guest post from Todd Dagres of Spark Capital. In it, he suggests that President Obama should get Steve Jobs to run a joint government bailed-out GM-Chrysler. Though I agree with the overall strategy of the article (firing the current auto execs and streamlining the product line), I don't think Steve Jobs is the best person to actually execute this. His other choices (should Steve not be available), John Chambers or Craig Barrett are somewhat more plausible, though not quite there.

It's a little simplistic to think that Steve can make everything he touches into gold. Though Steve has had great success at Apple and Pixar, the shear size of the auto companies dwarf even those two industry leaders. I think Steve could be a great product strategist for the auto industry, but I think it'll take someone with big industrial operational experience to execute on a new product vision. Maybe it's a tag team effort - Steve leading product development and someone like say, Jack Welch to run operations? I know Nardelli was a GE alum but I don't have much confidence in his ability to lead given his lackluster results at both Home Depot and Chrysler.  Perhaps the master can do better than the student.

I don't agree with GM and Chrysler

News came out today that GM and Chrysler seek an additional $22 billion in aid from the government. That's in addition to the $17.4 billion already committed. I just can't see throwing good money at a poorly run business. It's one thing to bail out banks because credit markets affect a lot of people. However, bailing out an automaker that continually makes poor decisions and even poorer cars is crazy. As a condition of any bailout money, I would request that all the CEOs and upper management be fired. I applaud what Ford has done in not requesting bailout money. Of the three US auto manufacturers, I'd most likely buy a car from them. Isn't it telling that the car maker that churns out the better products is the one that least needs help?

I woke up this morning to the radio airing the news that the auto bailout has passed.  I'm glad a lot of people won't be losing their jobs but I think we're only delaying the inevitable.  The $17.4 billion bailout has provisions that require, among other things, the automakers to "prove they can restructure sufficiently" or those loans would be called back.  My question is, can the automakers really turn it around?  It's like a gambling addict who just needs some seed money to win back all the losses his accumulated over the years.  Chances are, it's just not going to happen.  And what if they don't sufficiently restructure?  Would they really care if the loans are called back?  They'd be in the same position they were before the bailout except now with three months of salaries paid.  And actually, I don't think Congress would have the guts to actually do it.  The old cry of "we can't let the US auto industry fail" will be heard again.

If the government really wanted to make a difference, they should have asked for the resignation of all top level executives from any company that asked for a loan.  The way it's setup now, these automakers will come back to Congress in March and either ask for more money or time to prove they are restructuring (probably both).  Why would anyone give money to a group of people who have a history of failure?  This is in stark contrast to a company like Toyota who hasn't had an annual corporate loss in 71 years (they expect to end the current fiscal year with a loss).  In fact their profits in 2007 alone were $14.9 billion - almost the same size as the current bailout.  With a cushion like that, who needs a handout?