Warriors GM: ‘We are not shopping Ellis’ ... maybe 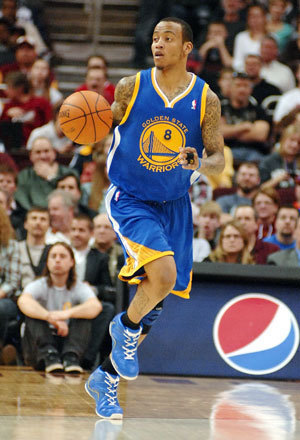 Just read the interview from Larry Riley in SI. I'm taking it with a grain of salt given that Riley is a lame duck GM who is just grooming his replacement Bob Myers. My guess is that a deal may still be in the works for Ellis but one of two things could be happening. Either the Warriors are trying to get more for Ellis or they are bracing the fans should a deal not materialize.

Ellis is a valuable trade commodity. He's young, scores in bunches and has a reasonable contract given his level of performance. He also plays no defense but in the right system, that might not matter as much. I'll believe Larry Riley when it's October and Ellis is still in a W's uniform.

I'm watching PTI (Pardon the Interruption on ESPN) and one of the segments is about Twitter. The story is that guys like Chris Bosh (http://twitter.com/chrisbosh) and Shaq (http://twitter.com/THE_REAL_SHAQ) actively use Twitter (Bosh has about 2,100 followers, Shaq has over 105,000!). Dan LeBatard and Tony Kornheiser are discussing whether more and more athletes will become active on Twitter. The fact that Twitter was mentioned by a bunch of older dudes on a sports show has demonstrated for me that Twitter now has crossed over to the mainstream. It's like when my mom mentioned that she was "Googling" a while back - that pretty much meant to me that Google had arrived.

Back to the show, Dan made a very interesting comment that with services like Twitter, sports reporters are now becoming less and less relevant. If an athlete can connect directly with the fans, do we really need the sports reporter in the locker room with a microphone? I'd say that sports reporters and especially sports journalists are still necessary. What these athletes do with Twitter only shows me what the athlete may be willing to share but that's only part of the story. It takes an investigative reporter or journalist to dig beyond that to uncover more truth or to provide interpretation and insightful commentary. Do you think A-Rod would have confessed to taking roids had a journalist not uncovered it? I think services like Twitter are a nice addition to the sports information stream but by far not the end all.